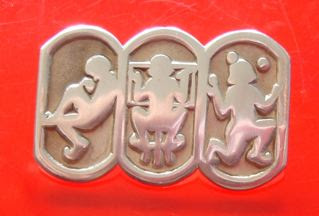 Not sure how it was that the whole economy suddenly flushed down the toilet but certainly the publishing industry was having its problems for a few years now. 2009 perhaps won’t be a year for lots of contracts. Still on February 11, at a CANSCAIP general meeting Gillian Chan, one of my favourite partners in projects with no profit, officially awarded me with the highest token of esteem the Canadian Society of Children’s Authors, Illustrators and Performers has, their pin. I believe Mark Thurman designed it and the three entities represent writers, visual artists and jugglers…I mean performers.

Gillian mentioned all my executive positions in the past, recording secretary, treasurer, vice-president and president; as well as my current position as programs officer along with Gillian O’Reilly and Andrea Wayne Von Koningslow. I learned things from each of these positions but my favourite pet projects were the mass book launches at the Mississauga Public Library, OLA, Book Expo and coming soon at the Saskatchewan Reading Conference in Saskatoon.

May there always be books to launch no matter what the economy does.