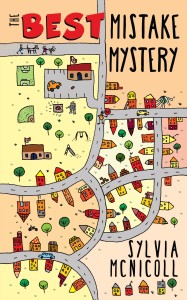 Dogwalker extraordinaire Stephen Nobel can get a little anxious, but his habit of counting the mistakes he and everyone else makes calms him. His need to analyze gets kicked into hyperdrive after two crazy events happen in one day at school: the bomb squad blows up a backpack and someone smashes a car into the building.

To make things worse, that someone thinks Stephen can identify them. Stephen receives a threatening text. If he goes to the police, his favourite dogs, Ping and Pong, will get hurt. The pressure mounts when his new best friend, Renée, begs for Stephen’s help. Her brother has been charged with the crimes and she wants to clear his name.

Is it a mistake to give in to dognappers? How can he possibly save everybody? To find out, Stephen will have to count on all of his new friends.

“The story is as fun and frisky as the dogs that Stephen walks, and it’s refreshing to see both an affectionate father-son relationship and a sweet coed friendship represented so genuinely.— Becca Worthington Booklist December 15, 2016

“A heart-warming mystery that illustrates that mistakes are not always a bad thing.” Book verdict

“This book was such a funny, sweet and enjoyable read.” My Interdimentional Chaos

“The descriptions of canine exuberance, are delightful and the best parts of this quick read and first in a promised mystery series.” Kirkus Revies.