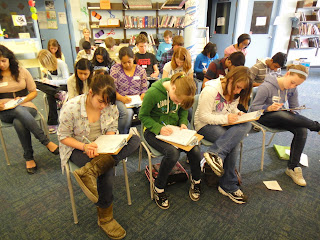 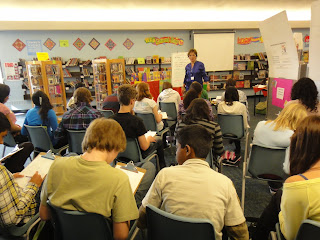 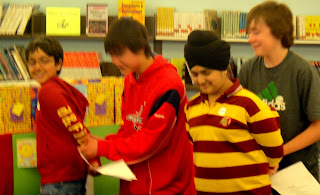 A brilliant writer herself, Amy Corbin, a teacher
from R.H. Lagerquist Senior Public School, arranged a day of writing workshops for the students who wrote to tell her why they wanted to work with a published author.
I lead four short workshops to groups of about 20 students in the library. Look how attentive and hardworking they were. The last group liked computer writing and as we had a little extra time, we wrote scripts, one of the choices being, a student tells his parent (father in this case) that he’s in trouble. In turn the ending has to be a resolution of some sorts where his dad metes out punishment or deals with the situation. I don’t know how it got to that point, but striped shirt boy plays the part of the gun wielding dad who helps red hoodie son wipe out some other dudes. This is the last scene in which father and son get handcuffed and taken to jail.
Strange developments and hilarious creations. The future writers of Canada.