Ten Hot Tips I learned at Packaging Your Imagination.

Okay maybe I didn’t learn these ten tips all brand new, maybe some were things I knew deep down inside and just had confirmed. After some twenty years of attending these day long seminars where I volunteered to do everything from placing and driving out of town speakers, selling books and raffle tickets, introducing speakers, fixing and adjusting audio equipment, I put my feet up and just listened. Here’s a few of my takeaways: 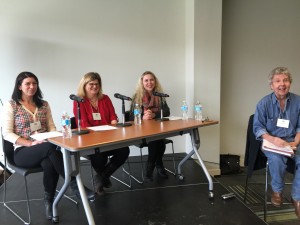 1) My agent David Bennett, at TLA, is the best. He’s the guy in the blue on the right.

2) I can’t wait to work with Carrie Gleason, the Dundurn editor (to the extreme left)  Together we produced Crush. Candy. Corpse when she worked at Lorimer, a very lucky book for me. This time around we’ll be working on The Great Mistake Mystery series.

3) You’re supposed to tell publishers when you’re multiple submitting and they won’t penalize you for it.  They may even read your work faster. The whole panel confirmed this even though some writers in the audience remained skeptical.

4) Response and publication is a waiting game. You wait and wait and wait. Nothing personal. Just busy. Just thinking. (I thought that treatment was only for me.)

5) Promotion is a team effort. Publisher and author.

6) I should try writing my picture book from the dog’s point of view, a tip from the sidelines, Rebecca Bender.

7) I should also email writing workshop promo material directly to the school librarians–not through the school board. This was a tip from Lana Button, again off side.

8) To teach rhythm in poetry workshops, I should try a drum. This was in a Q & A with Loris Lesynski.

9) There are many wonderful, creative, and fun people who attend Packaging Your Imagination, any one of them would make a great character in a book. (and I’m not just talking about the speakers). I learned this on the drive in and at lunch and breaks.

10) I look like Diane Keaton. Seriously. I’d just had my hair done. A fellow attendant commented how I looked like a celebrity. I joked that I was a celebrity–I was a famous Canadian children’s writer–why didn’t she recognize me? Then she snapped her fingers, and said I looked just like Diane Keaton.  I explained that in a couple days when I had to do my own hair, I would look like a Canadian children’s writer again. 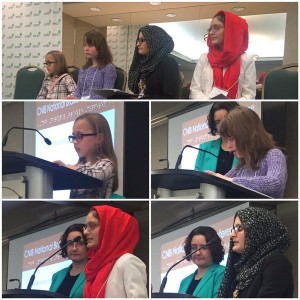