A toast to Eli Torensen and Anne Ramberg! 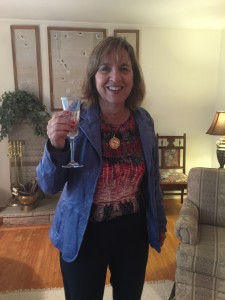 On September 30, 2015, I raise my glass to a publishing team I’ve never personally met, Eli Toresen and Anne Ramberg! On this day, after some thirty-two years of producing wonderful reads for girls in many countries, they retire.

To back track a little: In 2001 my agent at TLA  David Bennett sold my novel Bringing Up Beauty to Eli Toresen of Stabenfelt.  A real coup for which I am eternally grateful to him. This meant the novel was published in Norwegian, Swedish, Finnish and German. The advance outstripped any I’ve ever earned since, anywhere else.  Bringing Up Beauty enjoyed great readership in Scandinavia and quickly went into our equivalent of a reprint. Eli also bought the Canadian illustrator Shariff Taribay’s cover art. The book grew into a series of three, but when the Canadian publisher Stoddart went under, Stabenfeldt published the titles first.  Imagine, I wrote the books in English, emailed them as an attachment and within a few weeks received a positive response.  Every writer’s dream! 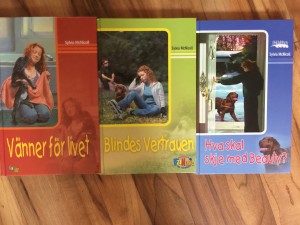 And then years later, Canadian publishers would release the work.

Never meeting in person, none-the-less through email we pitched ideas back and forth. Eli and I created a series involving a wonderful wolf dog named Paris and an unhappy teen named Zanna who teamed up to rescue many a lost and injured wanderer in the Rockies. Bears, cougars, avalanches, bighorn sheep, rapids, eco terrorists, snow storms, plane crashes–what didn’t I write about. And…who knew Norwegian and Swedish girls would enjoy the icefields of Alberta as much as I did. 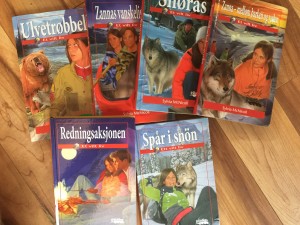 By the way, only one of these titles, the first, Last Chance for Paris ever published in Canada.

For Eli I also updated the first book I ever wrote.  Blueberries and Whipped Cream became this: 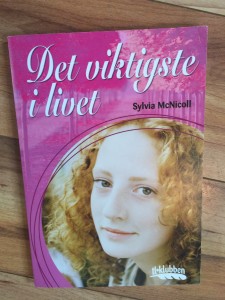 Most recently I pitched the idea of the one week do over series.  In each story, a different character under totally different circumstances would die from some random reckless act, go to a individualized in-between place and score a retry of their last seven days in an attempt to improve their life and perhaps escape fate. I wrote about a girl skateboarding attached to a car who ends up in a garden and another who drowns off a pier near Hamilton. 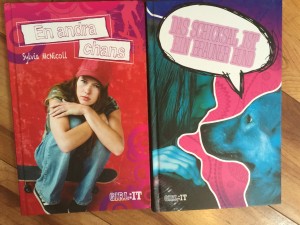 En Andra Chans became Dying to Go Viral in Canada only after a great success in Norway and Sweden. Fate is a Brown Dog has yet to find an English language publisher.

Here is my last work with these wonderful Norwegian editors who have published, including this one, 13 of my novels, six of which have never seen the Canadian light of day.

What a wonderful journey it’s been.  I received much fan mail, one from girls who read the Et Vilt Liv series every summer as a ritual.

In a world that rapidly changes and sometimes does not acknowledge great achievement and hard work, I drink my glass of champagne in a salute to these publishing women. To Eli and Anne!

May the next chapter bring you even greater adventures!

And who knows, maybe we will all hike together somewhere different soon.