At a CBC morning interview in Saskatoon last September I was asked how I connect to my teen audience, the unspoken end of the sentence may have been “when you’re as old as you are.”  I answered, perhaps too glibly, that people mistake writers for people who chase some market when they really just write for themselves.  In my case my soul and psyche is somehow stuck in 14-15 year old mode and so I write for that teen. Not every teen, just that one.

Besides how can you capture one universal teen voice?  Or captivate all teen readers?  Young people are just younger adults;  they are not a different species.  The way a teenaged person speaks is a function of his socio economic background more than a function of his age. Each young person is unique; every character’s voice can be justified by the background a writer creates.

Here is my thirteen-year-old grandson Hunter reading The Life of Pi.  I bet most critics if faced with a thirteen-year-old male character reading this novel might question it.  Heck I question it.  He saw the movie and loved it; now, as he reads, he hears an East Indian voice narrating to him, even though I assured him Yann Martel is not East Indian.

Creating authentic dialogue is by no means a task of creepily stalking teens.  I think it’s more a function of writing a believable, if more artful, facsimile of a younger voice. Nobody wants to read the way real people speak, it’s too mundane.  Growing up in French Canada (with German parents ) while attending English school allowed me to listen to a number of rhythms and cadences which naturally have flowed into my dialogue.

What about topics that capture kids?  Again there are all different kinds of young readers and no one book can grab all of them.  I think all writers should inhale and observe the world around them whether they write historical or dystopian.

Here’s another photo of Hunter being an individual just like every other teen.

A moment after I was lying down beside him observing Voice of Fire by Barnett Newman. If your eyes follow the edge of the red, against the black, up and up, you will experience a “zip” or flash of orange colour.  Too cool, for a thirteen-year-old…and a senior author.

The Thing About Signing a Book… 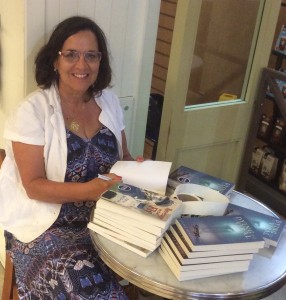 It used to be a no-brainer, autographing a novel that you wrote made it more valuable. The mere act of signing it in the bookstore created a bit of a hubbub around you, inevitably someone would buy a copy. You were a celebrity after all.

Along came that film Notting Hill where a small time bookstore owner played by Hugh Grant complains to  a movie star, Julia Roberts that she’d be hard pressed to find a book by a particular author that wasn’t autographed.

Signing your work sounded like an act of desperation. With the advent of self-publishing, the signing act (of desperation) became more common.  People may even steer clear of the desperate writer.

Besides that what do you even write in the book when you don’t know the person who may (or may not) buy it?

An author wrote Miss Manners and agonized to her about exactly that dilemma. Miss Manners responded that the same amount of creativity exercised to write a book was not necessary to autograph it.  “Best Wishes” was sufficient.

I like that.  I don’t write that though.  “Live to Go Viral”, “Enjoy reading “on the fly'” are my stock lines for my latest two novels.  In this photo I go crazy and write “History buzzes to life!” and “Don’t be a fly on the wall!”  or  “Make every moment count!”

Kids ask me in that voice of reveredom what it feels like to autograph my own books.  I hate to admit that it’s as though I’m writing lines for my grade six teacher.  Or recopying my work for my grade four teacher who didn’t like my handwriting.  I consciously try to get neater, I make my loops larger.

Today I was handed the blue and white “Signed by the Author” circle stickers. Yet another thing for the author to do, I thought grumpily.  Then as I sat placing the stickers in a spot that wouldn’t obstruct the great covers, I realized I felt pretty good, like I was giving myself stickers for good handwriting.  It was pretty neat and very loopy.

Props for the Author Visit and Literary Festival

Recently I needed to buy new footwear and I immediately knew where I would shop.  There was a small shoe store in a strip mall that had a huge fly poster.  Kids’ authors get this immediately.  “Of course, she wrote a book about a boy who kills flies for a contest. Obviously she needs this poster for…school visits.”

Literary festivals are a whole different venue. Tougher really. No projector and screen for our power point of cover images, setting, possible characters, fly diagrams etc. We don’t have the captive/captured audience of the school classroom.

Instead perhaps we draw a small gaggle of children who may or may not be snacking. Some will toddle around in only a diaper.  They stretch out their chubby hands to touch…something, anything.

At any given time their parents will yank them from the audience to go to the bathroom or another exhibit or to have their photo taken with the Captain Underpants festival mascot. This will make the audience shrink by whole families down to perhaps only a few flies.We need our reading/entertainment to be so irresistible that toddler will not be led away!

And so we need bright colourful (and unbreakable) props.

Before I even launched Revenge of the Fly, my husband ordered me hundreds of plastic flies (and a fly stuffy!).  I also bought an electronic fly bat.  It looks kind of like a tennis racket.  Not sure it will zap a plastic fly but I bet I will find a volunteer in the audience who will want to try.

Also, I bought a large copy of the original article in the Hamilton Spectator that sparked the whole idea:  Kill the Fly, Save the Baby! I’m having it drool proofed/laminated.  All of this will provide lovely fascinators for the crowd.

But the expensive sandals I bought turned out to be well worth the price. Once the salespeople understood that I had written this story set in nearby Hamilton and that it was about  a boy who needed to avenge the death of his mom and sister by killing flies, they immediately found me a fly bag and box–a great place to store my plastic flies and electronic zapper, as well as a freestanding model fly.  I won’t even have to spell the word for anyone.

Come and see how all this comes together at Telling Tales Festival, September 14, Westfield Heritage Village in Rockton.  Know anyone under 14?  Get them to design bookmark for the special prize awarded there.  Visit http://tellingtales.imaginationplus.com