Different Creative Paths and Skink on the Brink

After 25 years of published writing, besides feeling more free to creatively stretch my writing fingers, I like to travel the path of mentorship and support. A personal delight of mine has become to welcome and support new writers. It’s very lucky to buy and then have an author sign her early work for you.

and Suzanne DelRizzo (illustrator’s) launch of Skink on the Brink (Fitzhenry Whiteside) at Roxanne’s Reflections Book and Card Shop.

Resplendent in a Skink-tail blue dress, (Blue-y and New-y to the children’s literature scene) Lisa talked about the nearly extinct skink showing actual photographs of the creature. Then she launched into a reading. At some point a bright youngster hijacked the story to ask a question and tell a rambling anecdote of her own. Don’t you just love it! Lisa displayed great humour and tact as she told her how much she wanted to hear more AFTER she finished reading Skink on the Brink.

Dressed in a contrasting fuschia (the colour of the head of the skink at maturity?) Suzanne guided the plasticine sculpturing. Young attendants modelled their own skinks and animals.

Did I mention the beautiful cake with all the colourful three D characters of the book perched on top of it? So much energy and activity in both the book and on the cake.

The story follows Stewie’s growth through a close escape from a weasel. It shows his dismay and then his final acceptance of the changes in his body (a tale that metaphorically parallels puberty?) and his return to home and happiness, using narration, rhyme and rhythm. Then when you think you’re done, there’s a couple of pages that instruct on endangered species with more specifics on the skink as well as instructions on how to make Stewie from plasticine. Turn to the final page and be surprised by a lovely sunset farewell to Stewie and his new partner in life.

Well, I needed to buy a copy for each of my three sets of grandchildren and I know I’ll enjoy reading it over and over to them. I am a very lucky writer indeed to be privileged to know so many talented creators both early and further on in their careers. My bookshelves are blessed.

PS The report form Grammarly is that the text was original, however there were 26 critical writing issues giving me a score of 51/100. There were nine issues with contextual spelling, six with grammar including one confusing modifier, two with sentence structure and two with wordiness. Hey, that adds up to only five! With punctuation within a sentence there were three issues. With style and word choice there were six issues with writing style and two with vocabulary. Well, I’m feeling way more confident having used Grammarly. Not.

Seventeen years ago I won the third ever OLA (Ontario Library Association) Silver Birch Award for Bringing Up Beauty,(Fitzhenry Whiteside) a novel about best friends and boyfriends and fostering a puppy for Guide Dogs Canada. See above on the right my prize which is a braille painting of a silver birch tree.  If you run your hands over it, you can feel the image–the perfect award for a book about a future guide dog.

The award is the genius of the OLA to encourage and empower grade four to six students to read and vote for their favourite book from a list of ten librarian-selected Canadian novels.  Seventeen years ago, I also met Marsha Skrypuch author of this year’s Silver Birch winner Making Bombs for Hitler (Scholastic Canada). On the left is Marsha’s prize which is a grade six student , Gurleen Randhawa’s drawing and design–a winner of a contest in itself.

In the twenty years since it’s inception, the Silver Birch has morphed into many tree awards for different age groups and readerships.  I count eight tree symbols: Blue Spruce, Red Maple, White Pine,Golden Oak, Evergreen, Le Prix Tamarac et Le Prix Peuplier but each may have a nonfiction component, the Silver Birch has an express award. (https://www.accessola.org browse for Forest of Reading)

Along the way, Marsha and I have bumped into each other at many conferences and have driven as well as roomed together, becoming great friends.  When the OLA asked Silver Birch authors to create a two minute video to tell how the award has affected us, Marsha and I decided to celebrate together.  We asked my son Craig McNicoll, videographer and editor, to create our two minutes professionally.

First Craig set up an impromptu studio in our family room in the basement with lights and cameras.  Here he is attaching Marsha’s microphone.  Then I acted as interviewer for Marsha asking her the OLA supplied questions in intervals.  We repeated some takes so that Craig could edit the best answers together.  Then we switched chairs.  I had this moment when the hands of time shifted to 1996 when Craig was 14 and he filmed the Silver Birch ceremony even interviewing himself on Beta.  I will have to search the tape out and convert it to digital for old times sake.

After the video session (stay tuned for the youtube links when Craig finishes editing) we celebrated again with wine and an impromptu lunch, with our film crew’s family (Eireann, Violet, Desmond) and another local author, Gisela Sherman (Grave Danger, Scholastic Canada).  Happy 20th Anniversary Forest of Reading.  Thank you to the Ontario Library Association for all the support and readership you have given us.  For the alternate version to our years together and the day go to Marsha Skrypuch’s blog http://calla2.com/2013/07/the-tale-of-two-trees/

Engaging Characters take over the story

I never meant to write about them. The bombsquad using a robot to disengage a backpack “bomb”. A friendly crossing guard who twirls his stop sign like a baton and shares his driving judgements even though he can’t drive himself. And these two dogs, they literally grabbed the story like a stick floating in the water. 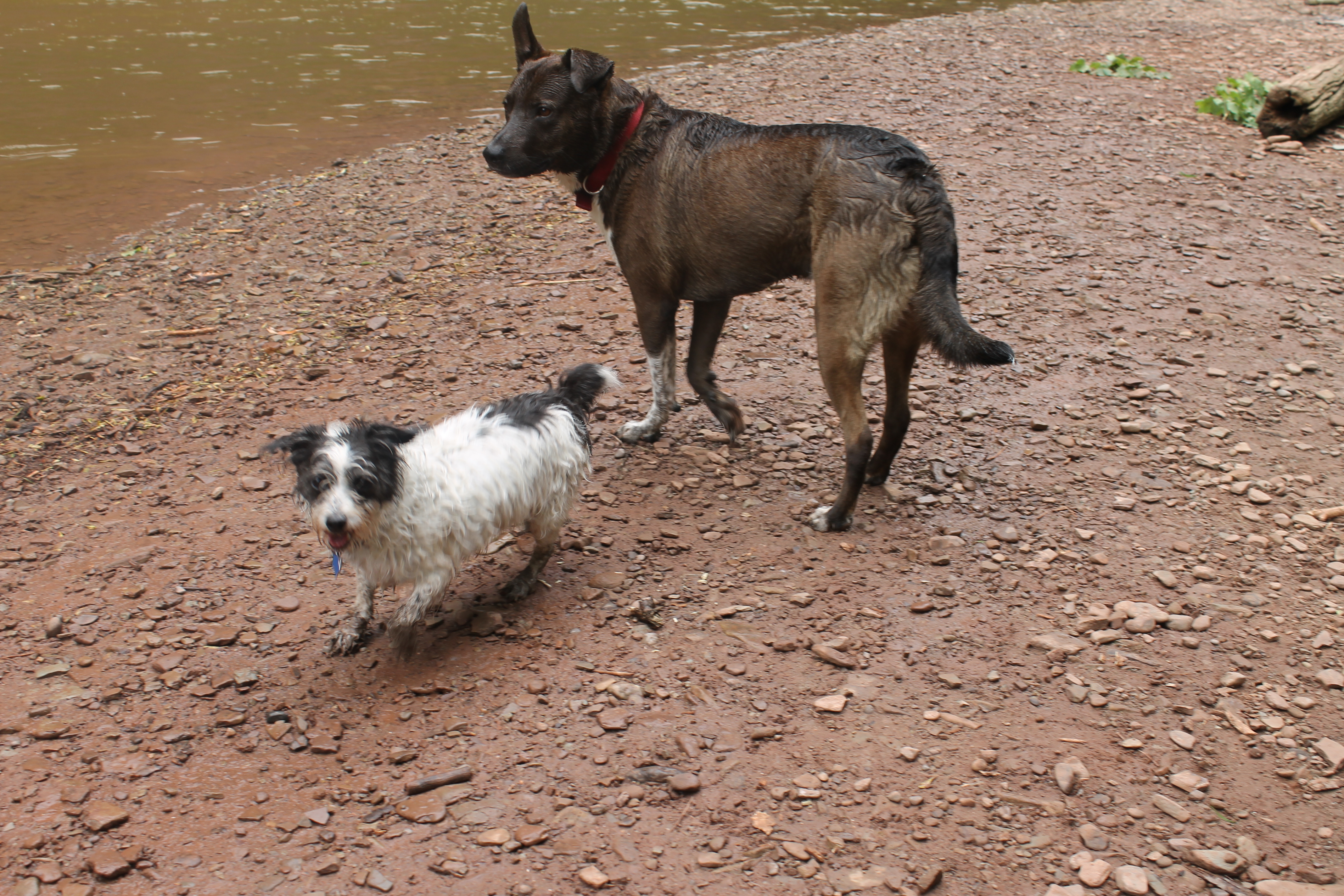 Two best friends, sort of, relate in a complicated way. Do they like each other? Mortie will stand up for Worf to the max of his little lung capacity. Worf does not kill Mortie when their respective fangs lock onto the same bone or stick–a huge compliment from a food defensive pound puppy.

The two of them hijacked my story about a dogwalking 12 year old who spots something he shouldn’t have and doesn’t even know it. An emailed threat warns him not to talk to the police. When the police interview him, the criminal kidnaps Worf aka Pong (transformed mysteriously into a greyhound by the way).

“Give me five hundred dollars or the dog dies”. Mortie aka Ping leads his walker in the rescue mission.