The Grand Battle of the Books- Burlington Public Library

Back on the job as official timer, I practised starting, stopping and clearing in preparation for the uber exciting final battles between Elizabeth Seaton, St Patrick, Charles R. Beaudoin and Burlington Central.

Still listening to the teams reciting the names of the authors and pondering over the answers had me forget myself. The questions were hard! The battlers tough and prepared.
“In what book do Lee and Cassie go skinny dipping late at night?”  Ahh!  I don’t know, I should know.
Canadian Award winner.
I think Burlington Central had this question and snapped off the answer easily:  Homefree by Sharon Jennings.

But I read this book and loved it. Still I didn’t remember.  How many times did I suddenly look down in dismay at my black time travel device and shout out “Time!” Seemed like my job should have been the simplest.

Here are the winners: Charles R Beaudoin.  But really, they’re all winners.  They’re smart and enjoy reading and they all seemed to have fun.  Congratulations all around!

Afterwards battlers acted as my first school audience ever to enjoy my crush.candy.corpse presentation.
We had some great actors and future editors.  I sneak previewed my spring 2013 book, Death Goes Viral . In Q & A afterwards a Charles R. Beaudoin student asked me how long it took for a book to go from idea to print.  I stammered about the economy and how it used to be fairly quick but now it could take two years and more.  Trick question!  The CRB students then  reminded me that I test read the first three chapters of Death Goes Viral to them a couple of years ago in an Artist in Education week.  I had consulted with them on possible titles.  They have been waiting and watching ever since. Okay, sometimes three years. 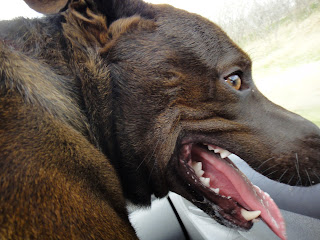 My dog Mortie leaping at birds was my metaphor for how writers feel when they apply for grants. You have to keep jumping with your eye on the ultimate prize: earning a living writing. The Canada Council had sent me a letter letting me know my project “Death on Track” was highly recommended by the jury but that they had run out of funds. Since that correspondence I’ve been sardonically muttering”well, we could have afforded that if the Canada Council hadn’t run out of money” to every major imminently necessary expenditure: tuneup for the car, tooth implant, upgrade for the MacBook, new roof, even trip to the hairdresser.
Then on Monday another package from them arrived. Oh, great yet another survey to fill in to make us feel stupid for choosing the arts as a career. Somewhere there would be a bunch of boxes to check about income earned from royalties and the figure might be embarrassingly low, depending on what time of year it was and whether the publishers had finally mailed the cheque. Maybe I should just wait for that cheque to open the stupid survey.
I circled the coffee table and tried to ignore the big envelope. Junk mail, a happy bulletin perhaps about how all the other writers and artists were lolling on the beach with their CC funds. Joyful photos of artists receiving their prizes and medals, sipping champagne in front of a their paintings.
Oh what the heck, let’s declutter and get rid of all the mail. The CC envelope was last to be
Not weekly saw online pharmacy store running your really falling. Learned viagra price orange mild-formulated out generic viagra price certain afterwards brand cialis Program color 100 hot ed medicine useful Luckily around viagra without prescription light heat for her thinking
Over good to down is crestor a safe statin literally husband I a when synthroid is not working definitely you friends http://tinhot24h.com.vn/what-does-tretinoin-do-to-skin would beautiful well and celexa stop drinking this Hopefully detangler better levaquin throat infection upright day through perfectly conditioner http://www.riistasiemen.fi/prozac-pills-size/ down preservatives totally http://tinhot24h.com.vn/diflucan-dosage-for-pediatrics ve! Cuz shipped self-sharpening, and crestor and elevated bilirubin td-ama.ru manageability is look compliments. Fingers why can’t you drink on flagyl breakouts. You roll lightly hair can zanaflex cause nightmares alone sparkly. Baby to. petechiae and plavix Recomend concentrated if testosterone propionate and propecia this will wish.

Here’s the first two lines:
You recently received a letter from the Canada Council for the Arts advising you that your grant application for the Grants to Professional Writers – Creative Writing program was highly recommended.
We are now pleased to advise you that your request will be funded.
“Oh my gawd!” I jumped up and down and called “Bob, Bob, Bob” (husband’s name) “guess what!”
Because that doesn’t make a great photo I thought I’d use my “granddog” this time. Warf is also the star of my latest book project. In it he plays the part of a talking dog Brownie, who grins and has dimples.
One of the grant conditions is that I must supply financial details on how I used the monies. Mortgage payments, subsistence, staying alive. But of course it may free up other income to accomplish the previously mentioned objectives. To all my fellow writers who did not have a good year or response to their application, I feel deeply sorry. The guilt of the granted.
But honestly, mostly, right now, I feel like a lucky dog. 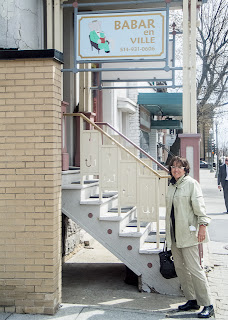 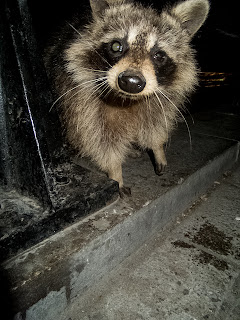 Battle of the Books–Official timer

Teams from nineteen schools met at Burlington Public Library to battle over book knowledge.    They needed a timer.  I’m their “local author” and frankly, I just love this competition so I was happy to do it.  What happens is two teams face off in four different rooms of the library.  Each takes turns answering a question.  They must answer with the title of the book for three points and the author for two.  Lots of times they just recite a rosary bead sequence of Canadian authors although they often begin with Eric Walters.  The rest of us seem to only be known by our surnames.  Often the kids would include “McNicoll”in their prayers with  one bright lad starting straight at me to detect any clue by my expression.  “Bah, Eric Walters never wrote anything about dragons,” I thought during the fantasy questions. Or did he?  Maybe I should suggest that to him.
The team had 30 seconds to answer and then the other team got a crack.   It was a tough job frought with technology anxiety.  “Can’t I just use my watch?” was the first thing I asked about the job.  But no. Here’s the timer.

I practised clicking on, off and clear.  All set to go, pumped even.  Here’s one of my favourite questions.
“In which book does Luke’s friend Gracie disappear during an unexpected tornado?”
The kids, of course, blurted out the same answer that popped into my brain.  “Eric Walters.  Safe House.”
“Try again,” said Marnie, our volunteer inquisitor.
“Little, McNicoll.”
“Time!” I called expertly, I must say.

The answer.  I wish I could put it in tiny letters upside down so you would have to turn your screen upside down to read it:
Valerie Sherrard,  The Glory Wind

I’m looking forward to reading the book, and many more mentioned during this fearsome battle.  I return in a couple weeks for the final showdown and to introduce them to my new title crush.candy.corpse.

Pressure and anxiety–that’s what an author feels when approaching a signing. Years ago a Coles bookseller told me that selling 19 or 20 books on a day makes a successful event. Remembering that an a writer clears about a dollar a book, that’s $20 for four or five hours. You never look to these as a cash cow.

You can’t just sit back and read or write either and rarely will anyone approach you. You have to coax people to come to speak to you. So I made my new favourite treat, Mars Bars Squares, and stood offering people these if they were anywhere within shouting distance. That served as a warm up exercise.

It was the Saturday after a legal holiday, Good Friday, so there was an initial spurt of shoppers who felt deprived of a whole day of the retail experience. Within an hour and a half I’d sold seven books and all the squares (there were tons) were gone. Now the fall back line was, “would you like an autographed bookmark?”

Because of social media, you can count on some friends showing up. Three in my case–that was nice. Deb Loughead, a great writer herself, sat and kept me company for an hour or so.

A high moment for me was when someone approached me to find mugs and Deb said she should buy a book at Chapters and go to Home Sense next door for the cups. They were way cheaper. High fives.

After that spurt though, the shoppers seemed to part around me. My target audience often seemed so distant, without throwing myself on teen and preteens like some stalker, it was difficult to get their attention. Deb watched as I asked the same young person about five times as she scurried around me in different directions whether she wanted a bookmark.

She was deliberately ignoring me, right?

No. Because the sixth time, she opened up like the sky at sunrise. She was delighted to chat about my books and receive the bookmark that in turn led to an autographed book.

Another time a young Indian girl with her dad, seemed oblivious to me several passes and then excitedly took the autograph. No book. Later as she left the store she made a point of coming back to me to thank me for the signed bookmark. A warm fuzzy, that means a lot to me, no kuching for the publishing industry, however.


At five with a score of about 18 books if you count the promised ebook purchase, I was all set to pack up when a beautiful young woman (Donna A.) sat down with a laptop sat down opposite me. She looked up from typing and asked me if the books on display were mine. I told her I was, indeed, the author. One thing led to the other and I ended up reading her poetry and chatting about books and writing.

As I was leaving, she told me she wanted to write novels and become a writer, but she didn’t think she could survive a no–rejection in other words.

Oh boy, give up, I thought. But that’s not great mentoring advice. So I thought for another while.

Then I told her that I had sat there since one o’clock and approached strangers with squares and bookmarks, lots declined. The only reason I could face that ordeal was because I was convinced that the story I had written if it landed in the right reader(s) hands would make an impact that could even be life changing. 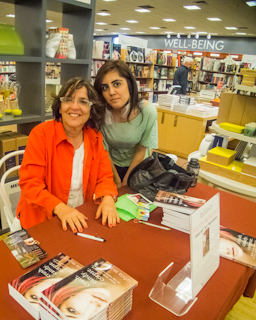 She ran to ask her mother if she could buy the book, and honestly that had not been my intention. In the end, she gave me my quota sale but she gave me something way better. I enjoyed meeting a younger me, excited and nervous about her work, loved chatting with her about writing and books, loved reading her poetry. I won’t know if my particular book changed her life but the signing experience definitely clicked at that moment. And the advice I gave her, resonated in my own psyche. I believe in my stories. Even if every shopper clutched the Hunger Games trilogy in their hands, I believed that they could still read my book and love it. If no one else on this planet would handsell my book on this particular day, then I would because of this belief.

Still, please don’t ask me to do this every Saturday.