It was a grey drizzly afternoon when we arrived in Ottawa but I hiked from the hotel to Parliament Hill immediately.  Just the sight of these buildings inspires me into belting out “Oh Canada” and I wanted to get that nationalistic feeling for when we broke bread with MPs next morning.  I felt a little depressed at the desertion of the hill worrying that it foreshadowed attendance.  When I saw the statue of the lady listening to the man I thought it might prove a metaphor (me begging for someone to listen to us).
I’m happy to say this was not the case.  Ten people attended.  I won’t list the MPs but my table included Burlington’s Mike Wallace and Dufferin/Calidon’s David Tilson.  I had a simple mission, to explain how a writer earned her living, to talk about what copyright means in terms of income and to talk about how the educational fair dealing exception 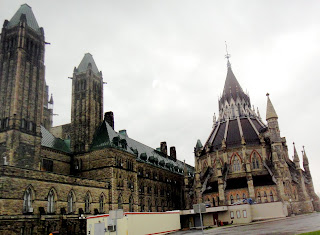 would negatively impact my earning stream.  This while we ate, always conscious that politicians had other places to be.  I thought it might be hard to squeeze it all in without madly ranting non stop but when Mr. Wallace, conversationally, asked if I earned a living at writing, it was easy to dive in. 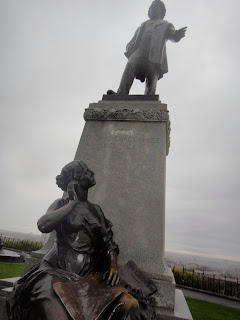 Carolyn Wood, my publisher partner, spoke more on the business sides of the problem.  Mr. Wallace and Mr. Tilson asked questions and I believe they were sympathetic.

Next I headed to parliament to hear the discussion of the bill. Wow.  All the arguments seemed more to be about the digi locks that the educational exemption.  The example of the mom who buys a dvd and wants to put it on her Ipod for her child to watch on a long trip was cited over and over. We don’t want to fine her 5 to 20 thou do we?  Another problem that was discussed was Distance Education.  According to discussions, after 30 days students are required to erase/destroy notes.  This was like book burning, according to the MPs.  Really.  Can’t they just pay for the usage they actually need.  Remember when we used to have to buy text books?

At the end, however, one politician whom Kelly Duffin had spoken too, actually suggested including the three step Berne test. Fair dealing won’t mean free chunks of our work then.  Hurray for Kelly.

Was the trip a success?  Yes, because we said what we wanted to.  Just like writing books, you have to celebrate the effort and process. If things don’t go our way in the end, we know we did our utmost.