Around the campfire, The Magic Mustache by Gary Barwin 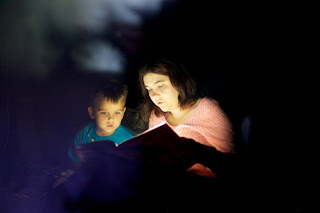 This is my daughter Jen reading to her four year old son William at their campfire at the Pinery Campground.  What amazes me is how intent he is in a story that he’s had read to him a hundred times, The Magic Mustache by Gary Barwin.  In it the son who is a nose, is given the task of selling the only family possession left, a set of glasses.  His parents, a set of eyes, expect a good exchange in return.  But the nose settles for a magic beard.  The eyes throw it out and it grows similarly to the magic beanstalk.  The nose climbs it to the castle of a mouth who threatens to eat him. Lots of great rhyme and hilarity ensues.
There’s a pretty happy ending about a face coming together and staying like that.   The magic of reading, the magic of a great story. 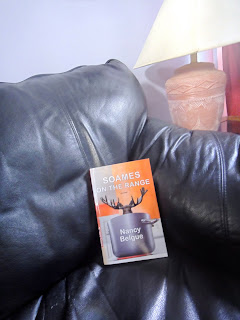 You read about all kinds of non-traditional families but you have to wonder how a child feels when their mom or dad announces something like a sex change or in Soames’ case a father declares he’s breaking up with Mom and moving in with his guy lover.  Soames lives in a really small town and looks and even moves like his father.  I cringe for him as I read about what he experiences.  That’s the beauty of books, you can go through all the emotions and come out stronger without suffering the slings physically.

In the end something really exciting happens to Soames and while that might not be the case for every kid who has to experience a lifestyle change like this, it does feel right to me.  Even if everything goes wrong, wonderful things can happen too.

I read a lot more books than I posted about right here on this couch in my living room where the air conditioning makes it perfectly cool.

Who Goes to Literary Festivals

It had been a blistering hot week but for Imagine in the (Gage)Park, there had been a cooling rain the morning of the July 24th event.  Gary Barwin, Jean Little, Gillian Chan, myself as well as facepainters, voice coaches, puppeteer  and Frontier literacy volunteers were on the site to entertain and delight.
Who comes out for these events?  You just never know. Ozo the dog came attached by leash to his master on a scooter. He has appeared on the screen in various roles, Ozo, not his owner.  For my audience, some very intense young writers complete with their manuscripts showed wanting to me to share some writing tips.  I read some of their work and know they’ll be presenting at a festival some time. 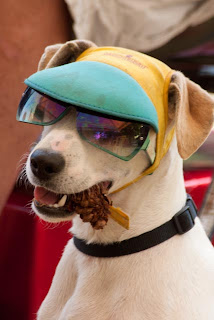 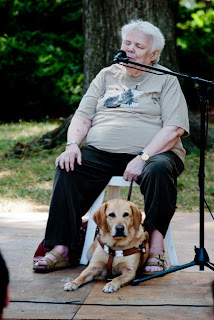 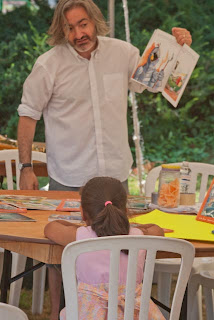 I only wish I could have come to one of these events when I was kids.

In a Lazyboy chair, The Second Trial by Rosemarie Boll

The lazyboy chair makes a very comfortable seat for reading this gripping but uncomfortable story. It’s about a boy who is the only member in his family who gets along with his abusive father  and misses him after he, his mom and sister, go into a witness protection plan.  His new life is his second trial and it spirals downward till he engages in abusive behaviour himself.  Here’s where I have to burrow into my chair.  I no longer sympathize with him when he stands by and even helps restrain a red haired boy as he is beaten and set on fire for the colour of his hair. Can you enjoy a read where the character sinks below your level of tolerable bad behaviour? 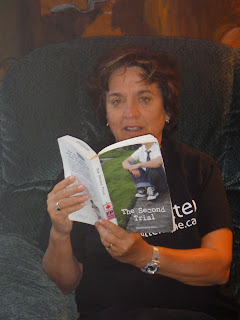 Recently a book of mine was rejected because the main character lied and was therefor unsympathetic to the editorial panel.  I think the only rule, really, is for whatever reason if the reader feels compelled to continue, the story succeeds.   The abusive behavior bottomed out there and was the turning point for the character.  The Second Trial  by Rosemarie Boll is a great argument for adults to read young adult.  The books can be just intense as adult novels but are usually shorter with more of a concrete ending.