What I’m reading and where and why 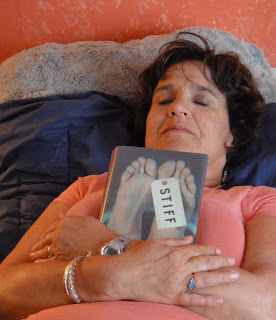 For Death Goes Viral, my character 16 year-old Paige Barta gets hit by a train when she walks along a track listening to an Ipod in a snowstorm. She gets another chance to relive the last week of her life and she visits BodyWorlds as she did first time through; this is an exhibit hosted by the Ontario Science Centre which features plasticized bodies, real cadavers mumified with polymar. (Oh yes I have been there for Today’s Parent Toronto.)  In researching details for the exhibit as well as the character who wanted to work in biological research of some kind I emailed Sarah Miyata, a research doctoral student who is author Cathy Miyata’s daughter.  Turned out she had volunteered at the heart, lungs, and liver table where visitors actually get to pick up a real plasticized organ.  She told me exactly what the organs looked and felt like and she also suggested I read Stiff by Mary Roach.
It’s fascinating stuff.  The author has a wicked sense of humour in writing about all the different ways in which a dead body can be reduced, reused and recycled.  I didn’t realize that plastic surgeons sometimes practise on cadaver heads (picture them in an aluminum roasting pan on a rolling wagon with a white table cloth) or that crash test bodies (not dummies) save 147 lives a piece.  There’s a chapter that talks about how scientists grafted a head of a puppy on another dog–made me feel the same way as when I was reading Arthur Slade’s Hunchback and the dogs were partially mechanized.
I could only read a chapter a night–as you can see I like to read it in bed.  Afterwards I had to read something fictional to cleanse my mental palate as it were.  Still I do recommend Stiff.
What are you reading and where and why?