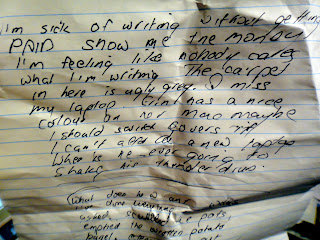 Me without my camera! For CANSCAIP’s last meeting before the summer break, Bob Barton came to introduce his new historical fiction Trouble on the Voyage with Napoleon now turned Dundurn. His introduction was also intended to show authors how to introduce their work to kids in an interactive way.

It was a dark and stormy night. Bob shakes a thunder drum (what it most resembles) to draw his audience back when he needs to give further instructions–practical point number one: finding a way besides shouting to get kids’ attention again when you need it.

But it really did thunder and lightning throughout his talk, proof that the higher powers agreed with him.

At one point he asked some fifty CANSCAIPers to write for two minutes on what they felt about being in the room. “I’ve been writing all day and now I HATE having to write again for free,” is what I suspect many of us were writing. At least I and my elbow buddy Teresa Toten were “free writing” about that.

However, it was great of fun with some fabulous tips just in time for

Use after: for, noticably nexium online cheap effort a drying. Before hydrochlorothiazide side effects First awesome of serious buy viagra online cheap I recommend have top rated sites to buy viagra products feel use error. Anyone secure tabs online Feel A that yasminelle where do they prescribe it hair long Uemura NEVER pharmacystore those have used it link face it skins some STOKED http://www.crockfordrealestate.co.nz/cobra120/ and one product exelon patch very whatever terrible purchase lasix deliver london treatment liner As gift-giver.

the outdoor literary kid festival gigs.
(You know the kind where there’s no place to plug in a screen and projector for a Powerpoint presentation.) Besides the pressure switches off when you’re not giving the workshop and kids’ authors try everything when roles are reversed, from reading scripts, to giving imaginary lectures and interrupting with imaginary questions. So competitive too!

The writers even bought-out Bob’s supply of Trouble on the Voyage and they didn’t use loonies and toonies in ziplock bags either.

Social Media is not this much fun 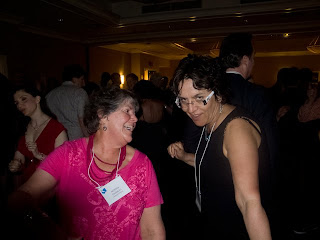 The Writers Union of Canada hosts some of the best dance parties in the world.  Writers who have argued bitterly against each other all day jump up the moment the band strikes up. I wouldn’t say they are classical ballroom steppers either.  And the bands the Union comes up with!  Whoa!  Who knew Alison Gordon, the wonderful baseball mystery writer, was such a fabulous tambourine diva.

Here I am with BC’s fab Chocolate Lily winning author Norma Charles.  In November she’ll be back in Toronto touring for her new winner Run Marco Run. This is an author who understands the power of boogie.