Free fall and I don’t even mean writing 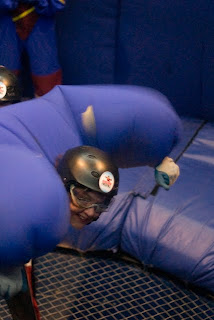 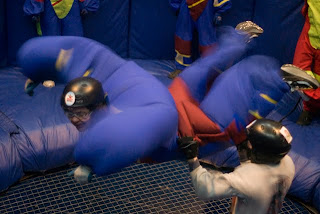 As you approach the Niagara Falls Freefall Indoor Activity Centre, you hear the roar of a jetplane engine. The blue and red figure floating on the tower looks vaguely like Superman, a hero from my youth. The other part of the building is a triangle made of glass triangles.

Now I don’t feel like a superhero. In fact some of my joints ache and the warning poster inside says people with injuries, sprains, fractures and SORE JOINTS shouldn’t participate.
I ignore it for my craft.
I hand over my Visa and get talked into adding the video, it’s only $15 perhaps I can extract bits for a powerpoint presentation on writing the book. Then I head into the brightly lit classroom with the television at the front. Imagine, the tv is a teacher. The video demonstrates hand symbols and body positioning. As quickly as they’re mentioned, I forget them and feel nervous that I should quit. Each student must demonstrate the correct posture lying across an ottoman. How much more stupid can I feel.
Then we sign the waiver. Those forms are the scariest part of this adventure as they keep mentioning death. How can anyone die bouncing of cushiony walls?
I could probably find a way.
Next we suit up in huge parachutey jump suits, helmets and goggles. We’re given earplugs to mold and insert. All set?
Into the wind tunnel we go and position ourselves along the bumper of the round room.
The jet engine roars louder and louder.
We have a coach in the centre and he guides us, one by one, into the air. Me last, thankfully. You can’t tell how high you’re floating or whether the coach is holding on to your jumpsuit but watching the others, he never seemed to let go.
So you kind of jump up and stretch your arms out, bending your knees and lets up. You float bellydown. The wind from the engine inflates the parachute like suit and you look like a marshmallow person. (I only saw this in the photo after) The sensation is much like the one you get blowdrying your hands in those highpower dryers in the Go Station and in the washrooms on the 401 leading to Montreal. You know the ones that kind of look like they’re blowing your skin off?
This sensation is mainly directed at your face and as I was grinning (from the sheer stupidity and embarassment) my lips were being blown back and I felt my spit leaving my mouth.
How did I feel doing it? I felt like the master of my universe, conquering all fears. Everyone should tackle something that scares them, it makes you stronger. 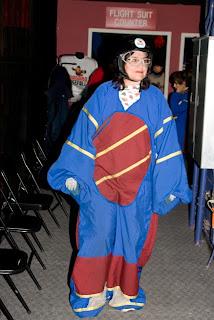 I liked all the Christmas cards I received. Friends are another of the treasures of life. But feeling that you’ve made a difference is probably the most exciting aspect of being a writer. It’s not always reflected in royalties, reviews or awards. This Christmas card made me feel as though I have contributed significantly to Canadian children’s literature. So I want to post it here, in case I lose the actual physical photo. Samantha read Bringing Up Beauty in grade 4. Now she’s at U of Guelph and works part time at Canine Vision Canada. She fosters many dogs but a couple of months ago she told me she was finally raising a chocolate Lab that she named Beauty after the two dogs in Bringing Up Beauty, A Different Kind of Beauty and Beauty Returns. I feel honoured. 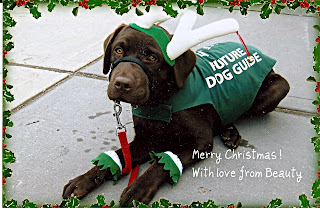