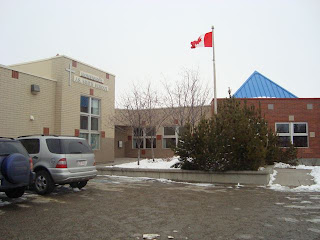 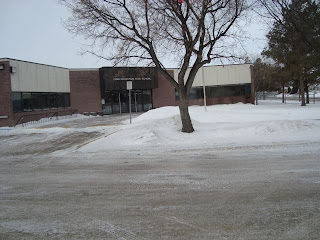 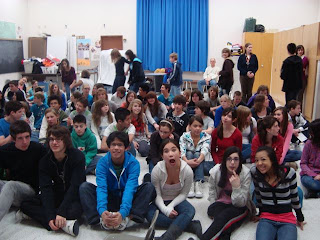 When you visit two schools a day for five days or so, the names and faces can blur. I especially enjoyed visiting Monsignor H. Smith, in Calgary, because clearly some of the students were fans already. They had read Last Chance for Paris on their own–perhaps because of a library display. Still having someone rush up to tell you they love your books just before a presentation on the same story, starts the day on a high note. Confederation and James Alexander had great enthusiastic students. Hopefully now those students will read at least three of my 24 or so books. Obviously we can’t expect them to read the Norwegian or Swedish ones. 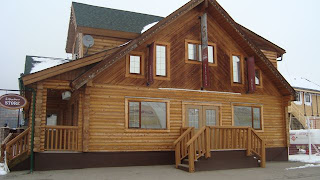 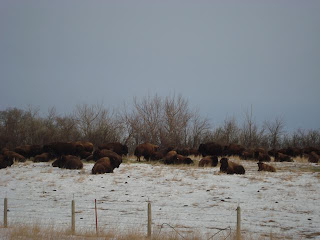 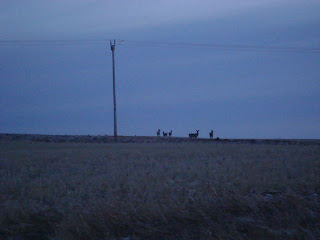 When planning a tour, it’s hard to fit holiday time in snatches between school visits. So that’s how we accidentally had a seven hour drive after a school visit in Calgary. Luckily there were no snow storms although at one point it looked like shards of diamonds were hitting the headlights so there were indeed flurries. Still we saw buffalo and lots of deer. At one point we drove over some deer bodies and then later a low-to-the ground sportscar passed with a furry body attached to its bottom.

The log cabin represents a Calgary Stampede store where we bought souvenirs. Memories of a stampede we’ve never attended.

The holiday part of the tour 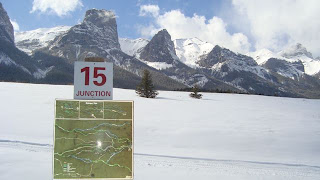 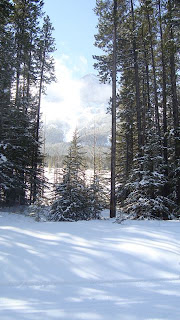 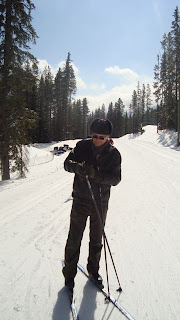 Today we enjoyed spectacular sunshine in the Rockies…and cross country skiing in Canmore, 11 kilometres of it. The trails at the Nordic Centre are groomed more carefully than the roads in to Calgary from my brief experience here. There was a snow dump on Saturday and on Monday some of the streets are still snowy trails. Conversely, the Banff trail resembles a highway– there is plenty of room for all

levels and types of skiiers to play side by side.

We’re not fit or skilled but slip sliding along allows plenty of opportunity to get different views of the Three Sisters Mountains.

Tomorrow we begin the work part–but it’s also a lot of fun–and that is to meet potential readers.

The Voyage is the whole experience 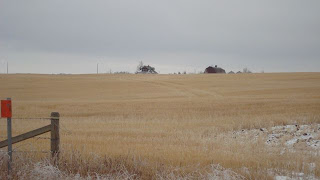 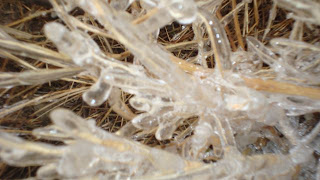 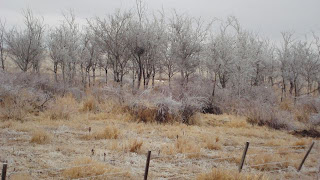 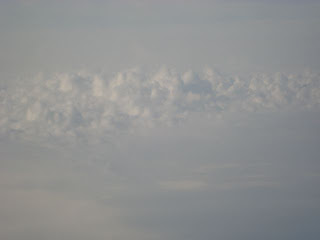 This all started because I wanted to watch the first ever Saskatchewan CANSCAIP mass book launch but I couldn’t get a grant for any readings before April 1– so Regina Public Library kindly agreed to host a couple of readings on April Fool’s day only I would being SK for days between the conference and their visit. So I emailed and called schools and somehow I got a Calgary reading. If there’s anything I like better than the prairies it’s the mountains. Only I love both and the

combination in one day is breathtaking.

So today we flew to Saskatoon–see cloud shot. Then we drove to Calgary. I love the prairie in between. The brush under a certain light is now purple, the wheat can be frosted or bright gold depending on the temperature and sunlight. The buildings look so lonely.

As we drove closer to Calgary we hit the worst winter road conditions ever. The wind blew huge drifts of snow across the highway so it felt like I was steering through a field–yup my turn to drive. Plus the drifts would stop with the advent of a farm house or strand of trees–the street would be bare pavement. Where the trees ended you could see ghosts of white streak across in some places piling pretty high. 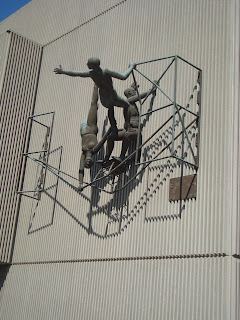 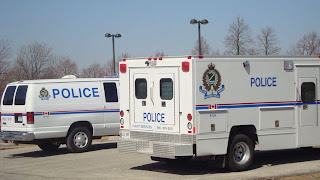 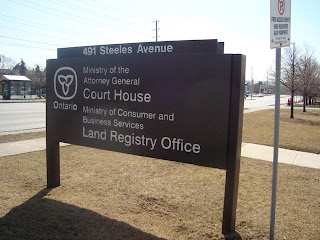 By Wednesday I received an email saying the editor loved The Nine Minute Disaster Zone. By Thursday I pitched her another idea. In this book a girl named Jazzy stands accused of murdering an Alzheimer’s patient during her 40 hours of volunteer work. (the girl’s not the patient’s0

Tentatively, the editor has said she’s intrigued but requires an outline and three chapters. For this project, so do I because I want to narrate it with clips from Jazzie’s volunteer journal as well as trial testimonies. I want to be sure I can do it myself before I become locked into a noose tightening contract.

So It was off to court I went to observe a 17 year old on trial for manslaughter. I could not photograph the inside which was exceedingly bland anyway, masking tape coloured walls with no pictures except for a coat of arms.

The sculpture on the outside was cool I thought.

The trial itself did not resemble Ally McBeal or Boston Legal. Instead the crown interviewed witnesses on miniscule obscure details they had to remember from a year ago. It’s a sad story. One teen teased another until the second teen, full of alcohol, got into a shoving match with him. The first teen hit his head. The injury was not evident till he began vommitting later that night. The next day a catscan revealed a cracked skull and a brain bleed. The young man went into a coma and after eight hours of surgery and a week on life support, died when his family made the decision to pull the plug.