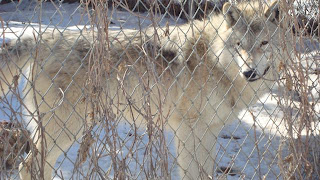 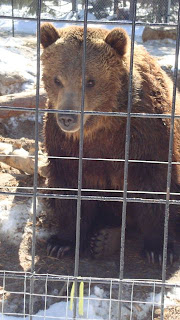 Because the heritage site was closed, we visited the zoo instead where it was admission by donation.  I couldn’t find a slot or box for a donation so I will donate to my VISA instead.

All the animals were enjoying the sun.  I couldn’t capture it but my wolf was actually grinning.  I think he was happy for me because I finished the Wild Life Series.
Tomorrow it’s back to the schools. 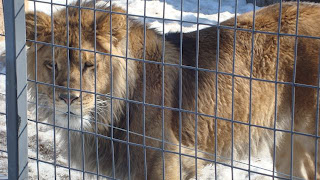 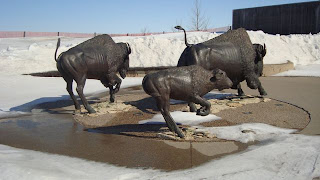 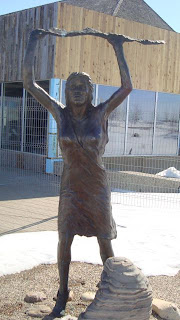 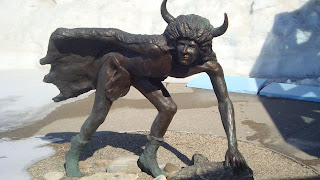 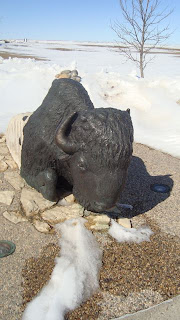 Wandering the streets of Saskatoon 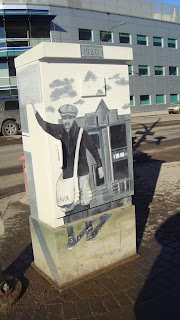 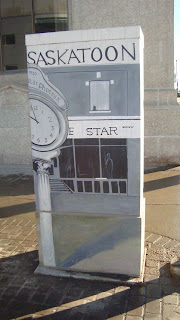 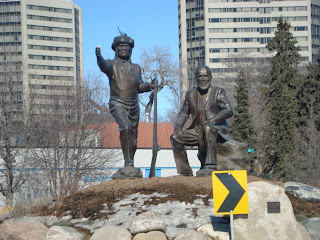 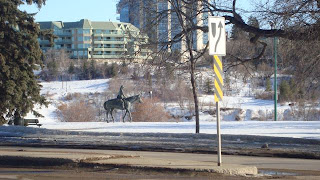 When you’re strolling though an unfamiliar city, you really don’t want to spend every moment in retail

situations soyou really appreciate the statues and other art. The Chief holds something in his hand resembling an onion but I didn’t see an explanation for it anywhere. I love the lone cowboy riding through and those newspaper boxes would make me want to read the news.

Saskatchewan Gang put on a signing 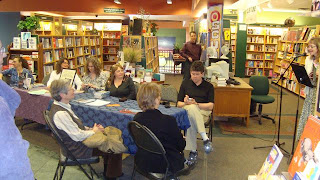 First I looked through all my suitcases and bags, then I searched the car. Finally I had to accept that I lost my handouts for my Ten Top Tips session at the Saskatchewan Putting the Pieces Together conference. I copied the document from the computer onto to a memory stick and Bob rushed off to copy more.

My sessions room was the Jolly Friar which seemed kind of cool but I when I saw an overhead instead of a data projector, my mouth went dry.

Still no need to panic, it had just landed in another room. A couple of minutes later an image was up and the teachers drifted in. Standing room only–I heaved a sigh of relief. Sitting all day on a Sunday preparing a handout and power point presentation is worth it when there’s a crowd and it’s appreciative.

Then, finished early enough, we headed to McNally Robinson bookstore which looks like a great place. My heart wasn’t broken when my books weren’t there–I’d googled in advance and didn’t even look or bug the clerks. I was still high from the Ten Top Tips session. So I just relaxed and enjoyed listening to my Saskatchewan friends read: Linda Aksomitus, Beverley Brenna,
Myra Guynur, Alison Lohans, Arthur Slade, Ed Willet, Mary Harelkin Bishop and Judith Silverthorne. I spelled all those names by memory which isn’t bad even if it’s not correct. I’ll edit later.

I sat by a huge Happy Writer cake and the smell overwhelmed me. So hard to resist swirly white icing on chocolate.
Treated myself to a copy of almost everyone’s books. Tomorrow I have a day off. No searching for papers, books, gathering miscellaneous and worrying about getting to a school on time because Princess Leaha, our GPS, is rather an optimist. 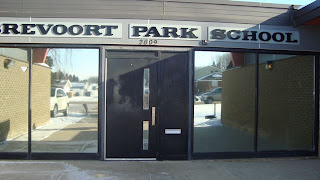 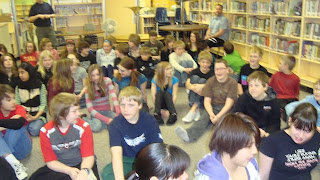 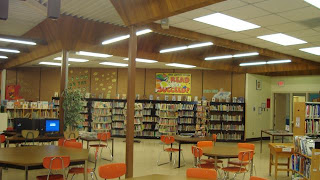 Catching tigers and growling for me–the younger set at Brevort Park School were great. The older kids were enthusiastic and good participators too. On to Lakeview, where we talked about the Beauty books and Last Chance. The grade 6 & 7s seemed to enjoy themselves. I don’t know about grade eight. They were quiet, too quiet.

Then I finally met the eight Saskatchewan authors I’ve been emailing for a while. They presented their new works at the Saskatchewan Reading Conference in an intimate roundtable style with some extremely keen educators. I want to read all of the author’s books and I wish that Ontario students could experience Saskatchewan through these amazing reads. The authors were: Arthur Slade, Beverley Brenna,Mary Harelkin Bishop, Muyna Guymer, Alison Lohans, Lidna Aksomitus, Edward Willete and Judith Silverthorne.

In between sessions, I found out a movie producer wanted to see the book I finished just last week: The Nine Minute Disaster Zone. I love the idea of the possibility but know people look and rarely buy.