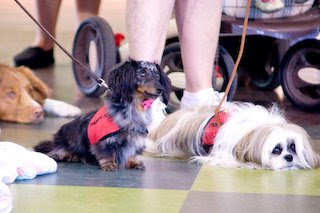 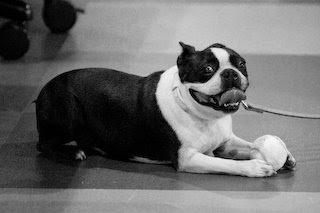 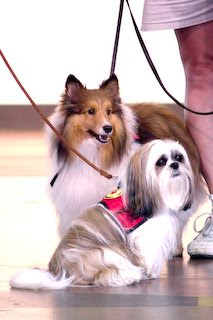 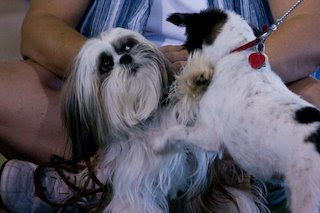 Well, Mortie, Bob and I spent the day at Pawsway Pet Discovery Centre. What did we learn from this event?
You need to bring your dog to get any attention at all. A lady who was talking about Border Collies did not bring
any of her Border Collies. No one visited her to talk. They all stopped at the therapy dogs, cute shitzus, mini greyhounds and one longhaired Dashund. One therapy dog was missing eyes, they had been surgically removed due to disease. So the therapy dog needed a guide dog. He seemed to manage pretty well though.

Mortie got some personal physiotherapy for his back right trick knee. He fell in love with many dogs and enjoyed socializing with so many canines, he’s still conked out on the couch. His normal energy level is renowned so that’s saying a lot.

The dancing dogs, golden retrievers had a whole corner full of brightly coloured nylon “crates” that looked more like mini tents.
I think Mortie needs one of those.

One chiuaua showed up in a mini skirt. Her owner said she liked dressing up because she knew that meant she was going somewhere.

Mortie scored some new kind of Purina dentibones. I sold under ten books but met some really nice people and neat kids.
Maybe later they’ll all go to the bookstore and buy more. I know we’ll be back to Pawsway. It’s a fun place. 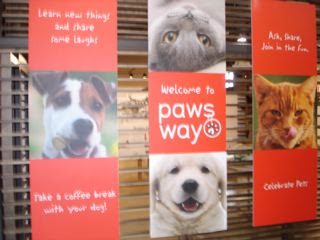 Tomorrow Mortie and I head to Pawsway at Harbourfront. This is the one and only Pet Discovery Centre and they’re celebrating working dogs and people who work with dogs. Because I write about dog guides, I will be there. I’ll talk about Bringing Up Beauty, A Different Kind of Beauty as well as the final book in the series, Beauty Returns. Also my husband Bob, photographer extraordinaire, will be there and those who wish can have their photos taking with me and my inspiration dog, Mortie. Now Mortie is not guide dog material. Actually his amazing fly catching efforts, leaping up into the air as high as a building and as fast as a bullet, have been captured in a similar dog, Finnigan, in the historical fiction I’m writing about the 1912 flycatching contest.

Hope to see some of you there. 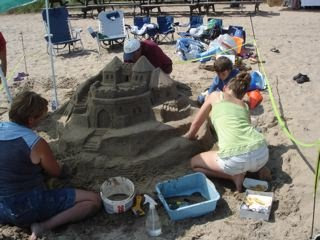 August 23rd proved to be a hot sunny day, perfect for the beach! There were 14 competitors, two in the adult, about four in the children’s section and the rest in the family division. What talent! Many beautiful and detailed castles were sculpted. A mermaid and sea serpent took awards. In this photo, you see the second place winners. They showed wonderful team work and excellent use of space. Next year August 15, 2009 will prove even better. There will be a workshop in the morning and a demonstration. Then in the afternoon–the competition!

Lots of time to practise. 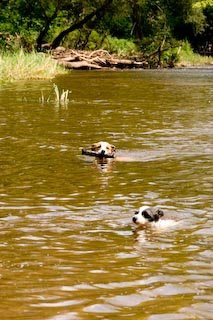 This year we bought a Provincial Park Pass for Hunter, thinking we could take him everyday after school to the play barn at Bronte Creek. Turns out during the year the playbarn closes at 4:00 and while Hunter’s class finishes around 3:15 by the time he surfaces it’s often 3:45.

No matter, we’re taking advantage of it now in the summer. We went to a “spirit night” where Hunter met some historical ghosts. We visited Spruce Lane Farm and he and some buddies tried out some old fashioned toys and wove.

The big plus turned out to be the dog park. No fence and just lots of free roaming area. Today someone told us about another leash free area in the camping zone. We had to drive in by another entrance. Then we could hike through fields and forest and more importantly through the actual creek. Lots of dogs were swimming in the fast moving water and Mortie joined in.

We also saw a dog named Cohoe who could pass for the wolf hybrid Paris in my novel Last Chance for Paris. Perhaps for book two we can shoot the cover in that exact spot. 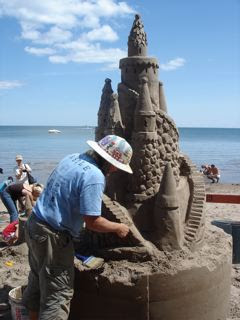 Next Saturday, August 23, from 10 to 2, I will be judging sandsculptures along with Sandi Castle Stirling, shown creating this marvelous castle, yesterday. She also gave out tips but I came to late to get any. I thought I’d bone up with some books from the library. Well, there are none on this topic except for Robert Munsch’s Sandcastle story. Everyone knows you can’t build a breathing barking sanddog, or?

In any case, I intend to google technique on the internet so that I can better judge this contest. I love sandsculptures anyway.