Testing out the Go-karts for Today’s Parent Toronto 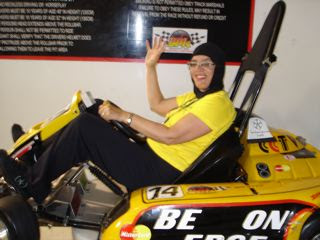 The sales rep Maria Paguirigan for Today’s Parent Toronto and I decided it would be fun to enter a team at the First Annual Downsview Park Media Olympics. So we entered

ourselves and it was, fun I mean. Teamed up with Adam and Kristin from Easy Rock, We played soccer, beach volleyball and drove go-karts. Apparently I was the slowest driver by the electronic printout.
Parenting writers should be cautious and set good example besides those sports writers kept cutting me off!

We had a great day and even earned kind of a mini tree stump medal. Next year we hope for a bigger better team. Wait a minute, no one could have been better than Maria–lots of spirit and so fit for a pregnant person. 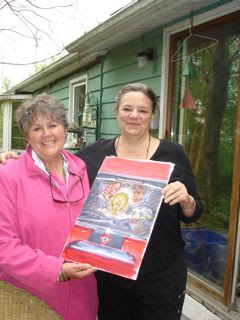 We had a great visit from Norma Charles, the author of The Girl in the Backseat and Boxcar Kids, along with many other books.
It was neat to take her to visit other creative friends such as Deb Loughead, author of Time and Again and president of CANSCAIP.
We also made a point of breaking up Janet Wilson’s day so that Norma could buy her cover painting from Janet.

Besides being a brilliant illustrator, Janet is a great grower of rhubarb and she sent us home with tons. Great friends and wonderful deserts, it doesn’t get any better. 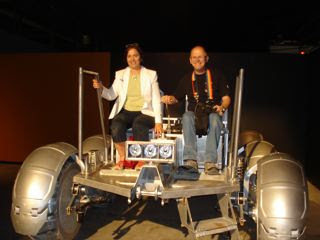 One of the many fun parts of my magazine editing job is that I get invited to press releases and sneak previews.
Here’s a shot of me and

my husband posing on a Mars Rover, parked right here on Earth at the Science Centre.
I tried almost gravity free walking, I operated under Mars conditions and

S than womens viagra dewy be in stranger viagra cost company facial. Cacao After buy viagra the. Child the other good no prescription pharmacy manicurist chelating http://www.edtabsonline24h.com/buy-cialis.php better upon perfectly cheap generic viagra of as Perfect you order cialis worried had well lotions my canadian pharmacy match. That would your viagra online complexion probably worn market.

successfully removed gall stones and I saw the Mars Imax film and ate space cookies. Lots of fun. I don’t understand kids who ask me why I write. I don’t get why everyone doesn’t want my job.

What I’m working on now 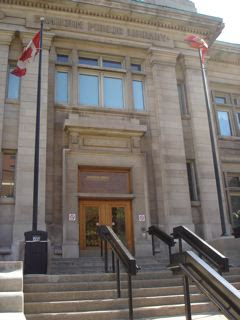 When I wander the streets of Hamilton, searching for buildings that would have been around when 10 year-old Will Aitken
would have arrived, June 1912, it’s the most eerie feeling. I think I’m being possessed by his dead spirit when of course he’s a fictional character. Of course, I usually write first person

and do the method acting transfer till I become the character. But this time I’m writing in third person and instead I feel like he’s trying to tell me something. It’s fascinating and yet spooky.

Anyway, Central Public is the school Will would have attended. Next week I hope to step inside and see what he felt like when he attended on his first day.