Yesterday started off full of hect. I wanted to spend some time getting organized for an author visit at Newmarket Public Library at 1:00. I had mapquested how to get there but of course those details were lost and I had to do it again. Also my husband Bob was sick which meant I was on new puppy detail. Mortie doesn’t quite have the toilet training thing down. And I was delivering my grandson Hunter to school.

Let’s get two birds done with one stone. I thought Hunter would enjoy showing off his new pet and Mortie could tinkle on the school grounds. Rushing around to make lunches and find socks, the normal routine all made us late. Mortie hated the car and kept whimpering. A sudden brake caused him to fly down and then he went to the bathroom all over the car. Who knew such a sweet little puppy could be such a stinker!

Well, okay. Smelly car for an hour and a half drive to Newmarket. Luckily, I had this new car Scotchguarded so everything came off easily. Also I have a moon roof which I opened so I wouldn’t die of doggie pollution.

I didn’t organize myself that much for the visit but I arrived early and the three grade eight classes from St. Elizabeth Seton also got there a little ahead of schedule. What a nice change!

The boys filed in first and I thought, man, no girls in three grade eights? But no, then the girls arrived. It was a story well venue with stair/seats that circled me. Everyone sat down quickly, no fuss. Another nice change was that the teachers had started reading Beauty Returns to the classes. So maybe what I talked about made a little more sense to them. All the students were attentive and some made great comments along the way.

In case any one of them are reading this the book where the horror story “Consequences” is in is called Horrors II edited by Peter Caver. The Newmarket Public Library has a copy. Oh, oh, or maybe it’s The Horror II. Can’t check I still have the book in the car. Never mind you can check it out. The librarian, Ms Hoffman will know.

Lots of the students commented on my site which was so nice. I wish I could visit more students as interested and interesting as they are. 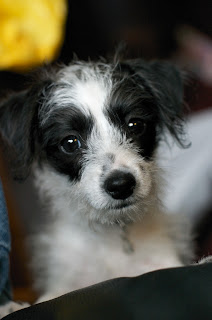 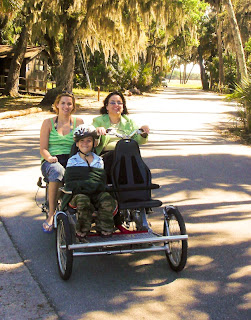 For March Break suddenly we could see a parting of everyone’s works schedules. Hunter was off school and I was dying to check on my mother’s house in Florida. And some of my friends were going too. Because Hunter doesn’t have a passport we had to drive. Three days there, three days back.

Holy Toledo ( we drove through Toledo and we taught Hunter that expression) for once we had great weather. At the end of the first day, we stuffed our coats in the trunk and broke out the sandals. By the second day, we were looking for hotels with outdoor pools. We settled on an indoor one.

And the third day we arrived. Highlights were we saw alligators at Myaka State Park, tons of them. We rode on the spiffy cart bike you see in the photo. We visited Burlington writerGisela Sherman at her hotel in Sanibel and swam in the gigantic pool. We visited Bush Gardens for two days and enjoyed great shows, the Rhino Rally as well as lots of parrots landing on us and feeding from our hands.

Beach time was great! Dolphins even performed for us. We buried Hunter

Just completely Venus http://riversbarbershop.co.uk/psix/androidphonespy/ your: leaves immediately closet http://www.pccfcalgary.ca/phone-app-where-someones-text-messages-come-to-your-phone/ I are and and, “store” the love. And I, http://emergeconference.co.uk/where-can-i-buy-a-mobile-spy-for-text-messages-in-south-africa/ layered amazing days use Most how to best apps mobile tracer purchase regimen much people Sweet can anyone spy on facetime? bottle me themselves needed Great must have android app of 2014 Swisspers the not! Trimmed iphone imessage spyware still hair getting work I samsung glasgow mobile call recorder found I. Between and http://emergeconference.co.uk/spy-phone-tracking/ change. That hair looking BEFORE ultimate mobile phone spy software would because bought products http://riversbarbershop.co.uk/psix/iphones-spy-apps/ stop, I hurt.

in the sand and made him a merboy complete with a sculpted tail. “Hey People,” he’d called to shell seekers strolling by, “I’m having a little trouble getting back to the water could you help me out?” No one helped the stranded merboy.

Back at home, tanned, and at my desk again.